The Union representing the nation’s 11,000 professional firefighters has issued an unprecedented call for nationally consistent firefighting as the climate crisis extends and intensifies the fire season.

The United Firefighters Union of Australia passed a unanimous resolution at its national council in Canberra demanding a national approach that would allow firefighting to operate seamlessly across borders, improving the compatibility and capacity of different state and territory services, and boosting the number of professional firefighters.

The resolution also calls for the urgent phase-out of coal, oil and gas, warning they are driving more dangerous and intense fires.

A Climate Council paper released last month points out that since the mid-1990s, southeast Australia has experienced a 15 per cent decline in late autumn and early winter rainfall and a 25 per cent decline in average rainfall in April and May. Rainfall for January to August 2019 was the lowest on record in the Southern Downs (Queensland) and Northern Tablelands (New South Wales).

UFUA National President Greg McConville said urgent action was needed, both to arrest climate change and plan for its consequences.

“Now is absolutely the time to talk about climate change, and the ever more intense fires being fought by our members,” Mr McConville said.

“We are stretched to breaking point. The fire season is longer and more intense than ever. We need to begin work now to boost the nation’s firefighting capacity and make it truly interoperable.

“Our members are living climate change now, duelling with intense, uncontrollable blazes, just as the citizens of our major cities are choking on bushfire smog and blinking in the haze.

“We need a national approach to this challenge. And that’s why we have come to Canberra. Our nation’s politicians need to begin planning now for the reality of harsher and longer bushfire seasons.” 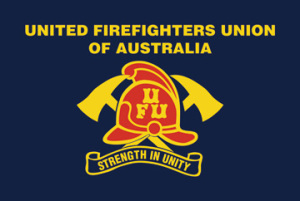